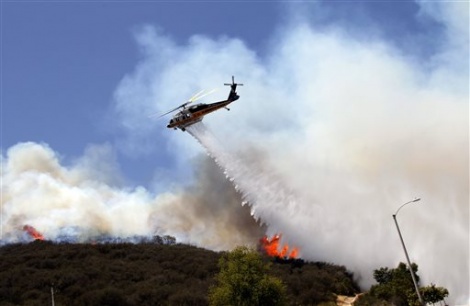 In the Jakarta storage depot fire the fire consumed 1,300 kilolitres (kl) of petrol stored in a 3,000-kl tank until it was doused on Monday morning.

Pertamina has set up an investigation team to determine the cause of the fire.

The fire that razed the a storage tank had also affected fuel in two nearby tanks.

The two tanks, saved from complete destruction by firefighters, store around 25,000 kiloliters of petrol.

Pertamina’s President Director Ari H. Soemarno played down suggestions the blaze was caused by substandard security arrangements at the depot.

Arie said security at the depot had always been of the highest quality and was subject to routine inspection.

“All tanks at the depot have received certification guaranteeing their security standards,” Arie said.

Pertamina was not the only victim of Sunday night’s blaze.

Pamri, a resident living in nearby Tanah Merah, fled his home when the inferno began and sought refuge beneath the Cakung overpass.

“I heard a big explosion. Initially I thought it was lightning but then the sky suddenly turned red like hell. I quickly fled with my wife and daughter,” Pamri said.

‘We have not included the future costs of contaminated fuel, largely caused by the water and foam used by firefighters to extinguish the flames, in our calculations.’

The state energy group says supplies would not be affected following the fire at the Plumpang oil depot, which supplies diesel and petrol to the capital Jakarta and to West Java.

‘Our fuel stock is enough, for now we do not need additional imports,’ Iin Arifin, Pertamina’s VP director, says.

Pertamina said yesterday it has adequate fuel inventories to supply the provinces of West and Central Java even after the the closure, including preparing 400,000 barrels of imported gasoline as back-up. It has supplied 7,300 kiloliters of kerosene, 13,000 kiloliters of low-octane gasoline and 28,000 kiloliters of diesel to five fuel depots on the most-populated island in Indonesia, the company said.

One thought on “Jakarta storage depot fire: losses is around €1 million”