A massive fire has caused explosions of oil tanks at a storage facility near Kiev, killing several firefighters. The inferno is out of control, setting 17 huge tanks ablaze. There are gas storage tanks on the site at risk of detonation.

According to a local TV channel 1+1, cited by RIA: “There were 180 rescuers at the facility when the blast occurred. It’s not known how many survived. Ambulances can hardly manage to cope with transporting those injured. Rescuers say that gas pipelines run behind the oil tanks on fire, and they can explode as well.”

“Just like you, we consider the possibility that fire from the oil depot may spread to the airfield area. The Defense Ministry and the air command ‘Center’ did all they could to prevent such a scenario. All special services of the airfiled and personnel are ready. This is a facility under our special attention,”Ukraine’s Defense Ministry said.

The disaster at the BRSM-Nafta facility some 20 km southwest of the Ukrainian capital started Monday night, with one worker fatally burned in the initial fire. Five others were hospitalized with serious burns.

The death toll rose Tuesday morning as the fire spread across the site and caused massive explosions. Several firefighters responding to the emergency died, Interior Minister Arsen Avakov said on his Twitter account.

Four firefighters are among the fatalities, TV channel 1+1 reported, citing a source in the emergency services.

Six firefighters are not accounted for, the Interior Ministry has reported. Six others were injured and taken to the hospital, it added. 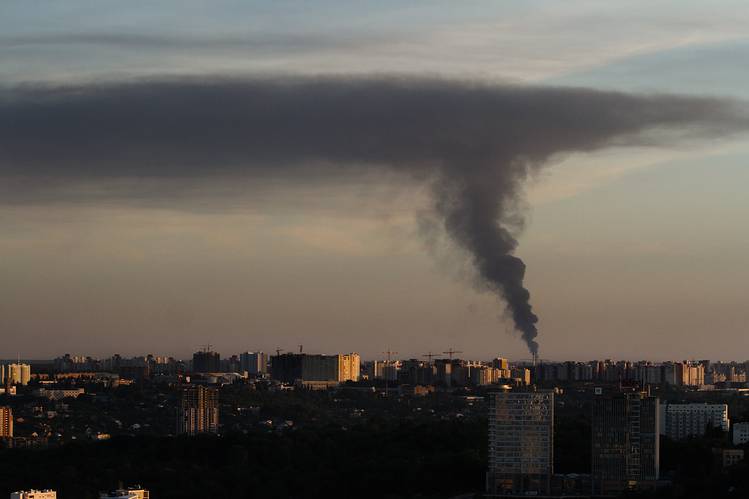 Some 50 fire brigades were called to the site to contain the blaze, but they were forced to back off.Residents of the nearby town of Vasilkov and several nearby villages said plumes of black smoke from the fire polluted the air. According to eyewitness accounts, the sky over the area is filled with black clouds, and rain, black from the smoke, was reported in the depot’s vicinity, 112 Ukraina TV channel reported from the scene.

The scale of the disaster should prompt an evacuation from the area, Ukrainian environmentalist Vladimir Boreyko told RIA Novosti.

“The process is catastrophic. People should be evacuated at least in a radius of 5 kilometers due to soot and toxic products from the fire. It’s a serious blow to health and can cause lung problems and cancer,” he said.

“Then there will be the second phase: acid rain destroying crops in the fields and forests,” he added.

The facility holds some 15,000 tons of various fuels. It also has several storage tanks for LNG, which could be detonated by the fire.

Zoryan Shkiryak, an aide to Interior Minister Avakov, said the cause of the blaze could be arson or a violation of safety regulations at the facility.

Also, the fire may have been started by a botched attempt to steal fuel from a storage tank, UNIAN news agency cited a police source as saying.