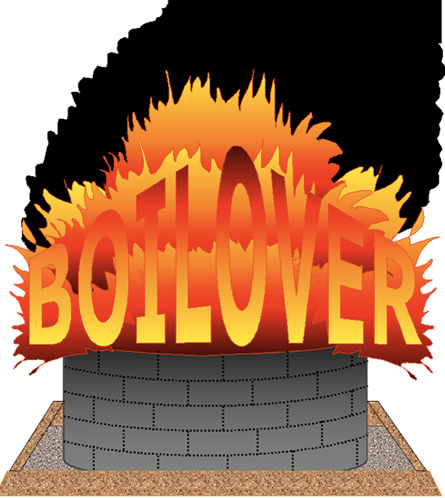 A boilover type of fire refers to an extremely hazardous situation where an attempt is made to extinguish semi-enclosed oil or petrochemical fueled fire with water. The hazard results due to the difference in density between oil and water.

Boilover is also common in the home as a chip pan fire when cooking.

As water is poured onto the fuel, it quickly sinks to the bottom of the container due to the water’s higher density, and has little effect on extinguishing the flames on the surface. The water on the bottom rapidly vaporises into steam, causing it to expand more than 1700 times in volume. The rapidly expanding steam (possibly superheated) expels the oil or fuel above upward and out of the container, resulting in the discharging of burning oil onto a large and uncontrolled area outside of the container.