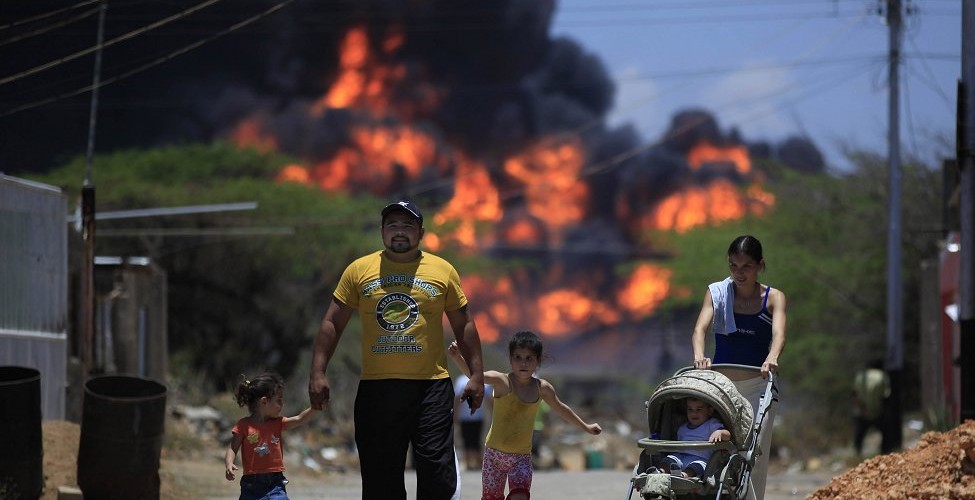 Amuay refinery blast: at the  refinery (in the Venezuela’s largest) spread to a third storage tank as firefighters try to contain flames burning since an Aug. 25 gas explosion killed at least 48 people.

Oil Minister Rafael Ramirez said two of the fires at tanks holding naphtha at the Amuay refinery probably will burn out by tomorrow as firefighters contend with a third fire that started at 2:15 p.m. local time today. There was no structural damage to the processing units at the facility about 240 miles west of Caracas, he said, adding that exports haven’t been unaffected.

“We have to announce that due to the blaze at Amuay refinery third tank which has had flames on its roof is also catching fire at this moment,” Ramirez, who is also head of state oil company Petroleos de Venezuela SA, said on state television. “We estimate that with the wind and conditions the two tanks should extinguish themselves by tomorrow, with this new tank we’re obliged to continue putting in all the effort to extinguish the fire.”

President Hugo Chavez, who faces elections in October, declared three days of mourning and toured the affected areas. The explosion occurred after a gas cloud formed and erupted into a ball of flames that engulfed a National Guard post as well as homes and shops in front of the refining complex. The shutdown threatens refined product supply as U.S. Gulf Coast plants halt operations as Tropical Storm Isaac heads toward the region.